Since the dawn of time (or at least the dawn of the Sonics), two forces, one good and one evil, have battled for the heart and soul of Seattle Supersonic fans.

Now, their day of reckoning has come.

It is up to you, the loyal fans, to decide who lives and who DIES:

Who will be the one, true, mascot of the Seattle Supersonics?

Update: The polls have finally closed. Squatch won, 40-33. The Wheedle is dead. Are you happy NOW, you heartless bastards?! THE WHEEDLE IS DEAD!!!

The 6-foot-6 Kutluay is expected to help fill the void left by free agent Brent Barry, who signed with San Antonio.

Kutluay, the captain of Turkey's national team, scored 19 and 26 points in exhibition games against the United States leading up to the Athens Olympics.

So, will Ibrahim Kutluay be the second coming of Detlef Schrempf or just another Vladimir Stephania?

The only known photograph of our lone fan.

Look what "garbageman84118" had to say about us on the Yahoo! boards:

Well said, Mr. 84118. I couldn't have made a stronger case for this site myself. 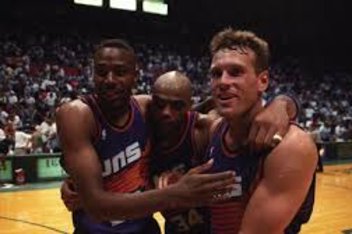 Sigh. At any rate, I wish that the Young, Stupid, Superstitious Me of back then would have just taped every game that year (you know, to foil the VHS Jinx where if you tape a game that you can't watch, it's pretty much a guarantee that your team will lose and you'll never watch that tape anyway; so you tape every game, thinking, "no way do they lose EVERY game, right?"), so that the Old, Partially Senile Me of today could enjoy the Young, Athletic, Still Had a Future Sonics of '93.
Posted by chunkstyle23 at 1:57 PM 11 comments:

Thanks to Pete's brief write-up on Turkish sharp-shooter Ibrahim Kutluay, we probably received 50 hits today (which is a lot for us!) from people Googling "Ibrahim Kutluay, Sonics".

The peoples just can't get enough of "Ibby", and since I'm all about making the peoples happy, Supersonicsoul will now be your One-Stop Ibby Info Center©!


There. Are you happy? Good. Now, how about making me happy and buying some crap from our new Supersonicsoul Store?
Posted by Paul at 2:45 PM 5 comments:

Fellow Ballard resident Susan Paynter has a story in today's P.I. about "The Greatest Sonic In The History Of Humanity" Ray Allen:

"I loved math. It was the only subject where you could really get an answer," Allen said. "Kids always ask, 'When will I ever need this stuff in life?' What most don't understand is that, with math, you get a solution you can apply to anything else in life. It's problem solving." Well, Seattle schools know they have a problem. The achievement gap between minorities and whites and between economically advantaged and economically stressed schools widens even further when it comes to math.

So Thursday the NBA All-Star will unveil his Assist With Algebra, a new middle school program for the students and parents of Madrona K-8 School and Meany Middle School. It's a push to raise algebra test scores for students, particularly those in the African American community. The tipoff event will be at Miller Community Center from 6 to 9 p.m.

Does that sound like a guy getting ready to pack his bags?

Backing Down The Onramp Of Life?

Gary Payton was arrested for a suspected DUI last week after police spotted the former Supersonic backing down a freeway onramp. (Is that some kind of career metaphor or what?)

During what is surely the worst summer of his life, The Glove© was embarrassed in the Finals by Chauncey Billups (Chauncey Billups!) in June, traded to the Celtics for Chucky Atkins (Chucky ATKINS!!) in August, and now gets pulled over for a Dale Ellis-like drunk driving stunt.

I think somebody needs a hug.

Haterade: Is It in You?

I was looking at our blazin' traffic stats and I stumbled upon
the "referrers" report. Out of curiosity, I clicked on one of them
... and followed the thread.

At first, I was appalled that anyone would dare diss the un-touchable
Mr. Cleveland. That feeling soon gave way to jealousy. For what is
more legitimizing for a pundit than having some genuine haters?
I can only hope that one day, I'll have complete strangers standing
courageously behind the shroud of Internet anonymity, calling ME a
dumbass. A guy can dream, can't he?