Not exactly sure what's going on here, but thanks guys!


ESPN quoted me in this article on bitter sports fans. In related news, I am ecstatic OKC got their asses kicked tonight in the NBA Finals--time to light the  Jack Sikma shrine and do the Habegger Hop!

The Zombies have taken control of Miami--get out while you still can!!
Posted by Paul at 7:22 PM 10 comments:

Here's a fun trivia fact for you:

OKC's top three scorers are all 25 years or younger (using total point scores to determine said scorers). Well, actually, they're all 23 years or younger, but I'm going somewhere with this, so bear with me.

Can you guess the last NBA champion who featured under-25-year-olds as its three leading scorers? 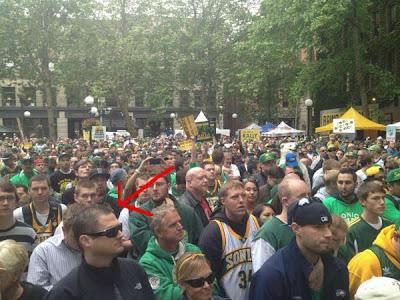 Sure, we're all happy that thousands of Sonics fans showed up for the rally yesterday. But what the hell was that CYBORG doing there? Was he an evil agent of the NBA? I smell a STERN-spiracy! I think it might be time to call in Danny Fortson to investigate.
Posted by Paul at 9:59 AM 4 comments:

Seattle Supersonics, I choo-choo choose you!

See you at Occidental Park at 4pm!
Posted by Paul at 10:14 AM No comments:

Per this letter from Chris Hansen to King County and the City of Seattle, the prospective new Sonic owner has added Microsoft's Steve Ballmer and renowned locals Peter and Erik Nordstrom to his ownership/arena investment group. As Hansen points out, their association "reinforces my commitment that the team will never again leave Seattle." 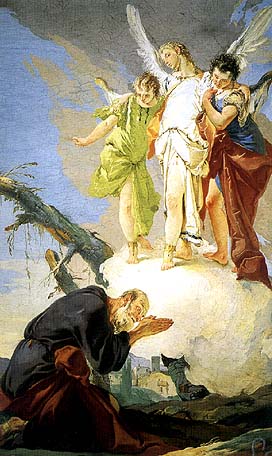 Remember the bit in the Bible where God says He'd spare Sodom if Abraham could find 50 righteous men*? I was reminded of that story from my church-going days when I read this comment on last week's post:

EvinOKC said...
I never watched pro basketball much until the Thunder came to OKC. On a whim I got season tickets and split them with family. Over the years I've become a die hard fan and my boy has grown up watching the team. Now he yells and cheers and gets mad when I make him go to bed for the Celtics games. Im truly happy for the Thunder but watching my boy I realize what you lost and why it sucks so bad! If he lost his team it would be gut wrenching for me. I truly hope you get a team again. Any fans who keep a blog up four years later are obviously true fans in my book! Hopefully you get a team again soon so I can travel to Seattle for a Sonics Thunder game!

I shall spare thee, OKC**. Just findeth me 49 more Evins.

* Genesis 18:26***
** No, no, I'm not saying I'm God or have any smiting abilities on my resume. No, I just speak for Him. KIDDING AGAIN.
*** Actually, The more appropriate line would be Jeremiah 5:1, where God says He'd forgive Jerusalem if there was ONE righteous dude there. Pssh, way to play favorites, GOD. 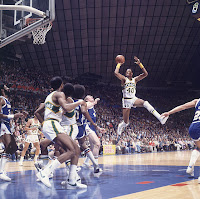 Some fantastic stuff here from Sports Illustrated, although the quality tends to deteriorate towards the end. My personal favorite is the one shown above.

Wow. Heat vs. That Team? Time to bust out the Game Genie and dial up a double fatality.
Posted by Paul at 9:58 PM 3 comments:

Hey, Brother, Would You Like to Buy a Map?

"The results from today’s annual meeting are the corporate equivalent of riots in the street – with the fury pointed directly at McClendon’s debt-fueled empire building and the conflicted intertwining of his personal interests with those of shareholders. With such anger, it’s hard to see how he can govern at all."

If I'm David Stern, I'm keeping a close eye on the Larry O'Brien Trophy for the next fortnight. With gold prices being what they are, there's a non-zero chance McClendon might try to swipe it and melt it down.
Posted by PN at 3:47 PM No comments:

(Courtesy of Peter Fries and Tri-City Herald)
Posted by Paul at 10:39 AM 2 comments:


[Note: I have a buddy from That City. He’s a good bloke. He’s actually more of a baseball guy. But to help me sort through all these thoughts I’m having, I had to imagine That City was full of guys like him that I didn’t know, but due to Historic Events, we totally hated each other. Which is kind of stupid when you think about it. So here’s a fake letter to an imaginary version of a friend who’ll never read it, because what kind of weirdo cares this much about basketball?]

I didn’t think the day would ever come. But I think at last, I’ve done it. I’ve reached the last stage of grief. Acceptance.

Now, acceptance is not the same thing as being okay with the outcome. Like I would ever say, “Golly, you know, the way the events unfolded was actually for the best! I’m SO glad that happened! You guys were totally right and it was so wrong of me to feel sad or angry. How petty and foolish I was to want to keep something that was dear to me and my city for 41 years. My bad, guys! Cheers!”

Where was I? Oh right. Acceptance.

Since 2008, I’ve been personally, illogically angry about the Zombies’ each and every success. Which means I’ve been getting progressively crankier for 4 years straight.

Over that time, I wondered how I would feel when, God forbid, THAT TEAM made it to the Finals. Or worse, WON the goddamn thing. I predicted I’d for sure be tooth-gnashingly enraged. Like, full-on, gamma-irradiated property damage mode at the very least. But truthfully, when the posts about the Game 6 results popped up in my Facebook feed, my mental state fell somewhere between resigned and numb, with a dash of “meh” thrown in.

I was disappointed. But I didn’t throw my phone, punch my television or rip my Sonics flag off the wall. I didn’t write a heartfelt note to Howard Schultz on the windows of the local Starbucks using dog feces. Progress!

Which makes me foresee a day where I can feel something like Normal Seattle Sports Heartbreak, instead of Post-Apocalyptic Seattle Sports Heartbreak. And when that day comes, it’s possible that we might be able to coexist in this dimension. We won’t have to like each other, but we can be cool to each other. As in, walk past each other in the hallway and do that up-nod “’Sup?” thing without talking or stopping.

How do we get there? Some suggestions in my usual bullet-point gimmickry:

That’s all I got for now. Suggestions welcome.
-Chunk

This day in Seattle Supersonics history . . .

On this day back in 1979, Les Habegger did the Habegger hop and the Seattle Supersonics won their only championship.

I was seven years old at the time and preparing to move with my family from San Diego to a mysterious place called the Great Northwest, which I was pretty sure was full of Bigfoots.

We were at a friend's house and got to stay up late because the grown-ups were drinking and forgot about us (1970s!). My big brother and his friend were watching a basketball game on TV. I couldn't believe people played sports this late at night. I would later find out that the game was tape-delayed. THE NBA CHAMPIONSHIP WAS TAPE DELAYED!

With Bird and Magic on the way, this turned out to be the last year no one cared about the NBA. Tough luck for the Sonics, but bad timing turned out to be a regular occurrence for the franchise (asking for a stadium right after the city paid for two other ones, drafting possibly the best player in franchise history the year before they move, Patrick Ewing).

On this June night in 1979, however, none of that was on the radar. There was joy and excitement and champagne on the TV. And Seattle looked like a pretty cool place to live.
Posted by Paul at 2:33 PM 1 comment: