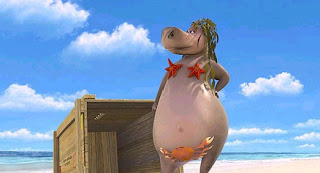 Whether this whole Seattle Super Hornets deal happens or not, one thing that won’t go away anytime soon are the folks shouting “HIPPO CRATEZ!” at Sonics fans anytime we pine for another city’s team. Given that the only way Seattle ever gets a new squad is via relocation and not expansion, those shouts are only going to get louder if and when some beleaguered franchise trucks itself up here.

Are those accusations on point? Are we any different from the Okies who came to our blogs in ‘08, drooling over our team and insulting our town? Are we hypocrites for wailing and crying in a valley of tears when our team was taken, but then circling like vultures two years later as soon as another team looks vulnerable?

In a word: yes. Yes, we are being hypocrites. And after some soul-searching, I realized: I’m okay with that label, because it turns out I was a hypocrite before I lost my team anyway. Heck, in a very “Let he who is without sin cast the first stone” kind of way, pretty much every sports fan is a hypocrite to some degree. And since I want back into their club, I gotta own up to it.

How do I figure? When the Hornets moved from Charlotte to New Orleans, did I declare a personal boycott of the league and its corporate partners? Mm, no. When the Grizzlies relocated to Memphis, did I write angry, profanity-laden emails to David Stern every day for 14 weeks? Nope. Or, bigger picture, how about when the Browns were taken from Cleveland, the Oilers from Houston, the Expos from Montreal and so on? Did I stand up and say anything, did I curse the leagues, did I turn my back on the sport in solidarity with their fanbases and never return?

No, I didn’t. And unless you lived in those towns, none of you a-holes did either. Like most people outside of those cities, I basically shrugged and said “Man, that sucks. Oh well, at least I still have my team. Now what channel is TNT again?”

Oh, but when it was my team? You bet I got fired up, posted on blogs, made posters, attended rallies. (Instantaneously I am reminded of the Tea Baggers who, all of a sudden, are scholars of the Constitution and the writings of Ayn Rand. Yes, I see the irony.) Yes, looking back, I shake my head at my naivete, thinking that the world would surely reward my loyalty and passion. Ha!

But then let’s look at it from the new cities’ perspectives. Did the folks in New Orleans and Memphis (and OKC) go, “No, we will not accept this team because you have wronged the good people of its original city! Be gone, interloper!” Did the fans in Baltimore say to Art Modell, “Mm, no thanks, we’re gonna wait until the Colts come to their senses and leave that no-good whore, Indianapolis.”

Look, if you are a sports fan devoted to “your” team, chances are, you got your team through some shady, long-forgotten deal that screwed over another town. And of course it sucked for that town and those folks hated you and cursed your ancestors, but only until they could turn around and screw over some other town. If this doesn’t apply to you, congratulations, you’re a Sheffield FC fan and what are you even doing here?

Basically, being a modern sports fan REQUIRES different degrees of hypocrisy. You get all sanctimonious and condemn college athletes for taking money from agents, but think it’s fine if the university makes millions showing his games on TV or selling his jersey at Champs. It’s awful if Barry Bonds breaks the home run record while juicing, but you wear five LIVESTRONG bracelets on each wrist because you love Lance Armstrong. It’s great when your city gets a franchise from some other town, but it’s terrible when your team gets jacked.

Admit it, and go on with your fandom. If you’d just own up to your double standards, you’d be no different from the boxing or NCAA football fan who acknowledges the corruption, condemns it, but holds their nose and goes on rooting. They’re doing okay, aren’t they?

So the question for the Sonics fan shouldn’t be, “Am I a hypocrite?” It should be, “To what degree am I a hypocrite, and can I live with that?” I know my colleague Pete’s answer.

Regardless of yours, please refrain from sharing any douchey, unsympathetic thoughts on Hornets, Kings or Grizzlies blogs and news stories. Hypocrisy is one thing, but assholery is never excusable. Let’s try to keep it classy, shall we? Thanks.

Whoops, sorry. Thought I was on Facebook. Great work , Raf!

Hypocrisy is one thing, but assholery is never excusable. Let’s try to keep it classy, shall we? Thanks.

Good luck with that. The more I think about it, the more I realize the main reason this whole thing pisses me off is the way Seattle fans are piling on New Orleans fans. Totally inexcusable and lame.

Again, I disagree with your argument, but I appreciate the sentiment.

Piling on Hornets fans, or any other fans, is sheer douchebaggery. They're just powerless schmucks like us, why get on their case?

When the Okies left their bon-mots in the comments in '08, you know, witty stuff like "were gettin you're team go commit suicide after you blow each other homos!!!" it made my blood boil and diminished my opinion of that entire state. So I hate to think there's guys from our side committing similar wankery.

I'm with Chunkstyle - sort of a resigned acceptance that this is the way the NBA (or any pro sports league) works. If we wants the basketball, we've got to put up with being assholes towards other cities. (a-holes in regard to taking their team, not 'piling on' as you guys put it).

It's like hot dogs - I love eating them, but I hate to think what goes into making them ... so I just ignore that aspect and focus on the enjoyment instead.

See, Anonymous gets me. Who among us is above reproach? Who can say that their sports fanaticism is pure (except, I don't know, someone super-old like the last living Brooklyn Dodgers fan?)? And once everyone comes to grips with their own sullied record, how can they ever turn to us and say "How darest thou covet thy neighbor's team?"

Alright then. Please amend all blogs/videos/sob stories calling out OKC people, if the fans of teams you guys are being hypocrites.

*you guys are talking about stealing, that is.