The Loudest NBA Crowd of All Time? It wasn't Sacramento (or Seattle!) 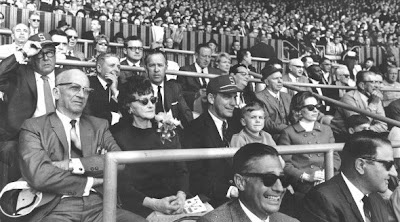 Whenever one of the inevitable Seattle vs. Sacramento flame wars heat up, one of the things Kings fans like to bring up is the alleged Guinness record held by their old Arco arena as the loudest NBA crowd of all time.

Now, having had my ears drums nearly melted at several Seattle sporting events over the years, I had a hard time believing this. I mean, even with all those goddamned cowbells, how could roughly 17,000 people at Arco be louder than a sold-out Coliseum booing Charles Barkey and the refs in the 1993 Western Finals against the Phoenix Suns? Or the grunged out Key Arena maniacs cheering on the Sonics as they blew out the greatest team of all time in game four of the 1996 NBA Finals? Or the (then) record 40,172 screaming Supersonics fans at the Kingdome in 1980?

Well, it turns out the Guinness Record for loudest NBA crowd of all-time is not held by the Sacramento Kings. Nor is it held by our beloved Seattle Supersonics. Well then, who the hell does hold the record?

That's right. According to the official Guinness Book of World Records website, the beleaguered, rumored to moving at any moment Bucks officially set the record in 2008.

Which just goes to prove two things: 1) Guinness must have a lot of relatives living in Wisconsin, and 2) Chris Hansen really needs to invest in a decibel meter in the new Seattle Sonics Arena.
Posted by Unknown at 11:59 AM

The Milwaukee Bucks? The '08 Bucks no less? I do have a hard time believing this. :D

And it came against the then dreadful Clippers... you can't come up with this!