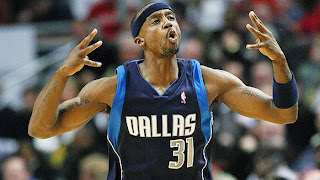 For the first (and hopefully last) time, I found myself rooting for a team from Texas tonight, as the Dallas Mavericks beat the Miami Heat 105-95 to win their first championship.

Regardless of the reason, congrats to the Mavs for all of the above. And let us never speak of it again.
Posted by Paul at 9:36 PM

As a Mevericks fan and just finding this random post on the interweb I have to say thank you for the support!!! Also Seattle should have a team and they should've never left. My life as a Mavs fan is complete and it just seems like good triumphed over evil.

Although the reason was probably because the OKC was going to take some fan base away from Dallas, If I remember right, Dallas was 1 of only 2 teams (Portland the other) that voted against the Sonics moving. Just something to consider when rooting for any other team.