What would you say is the craziest moment in Sonic playoff history?

40-something fans might opt for the arrest of Dale Ellis and Kevin Williams outside a Houston nightclub in the midst of the second round of the 1987 playoffs. 30-somethings might go for the Ricky Pierce/Gary Payton post-game battle after an inglorious defeat to Denver in the first round of the 1994 playoffs. 20-somethings may side with Jerome James donning his infamous garbage bag cape after a first round win over the Kings in 2005.

But what if I told you those were mere trifles; that the craziest moment involved a livid Rick Barry, players getting doused with refreshments, Leonard Gray’s fists, and a crazed woman with a purse?

It was April 1975 and perhaps the only thing riding higher than the Sonics were the Captain and Tenille. Coached by Bill Russell (the Sonics, that is, not C&T), the Sonics and Seattle were NBA Playoff virgins and the city was in pandemonium, caught up in the excitement of a first-round win over Detroit and what had become a terrific second-round series with the Golden State.

The Sonics had knotted the series at two with a 111-95 shellacking of the Warriors in Game 4. Sure, the team dropped Game 5 down in San Francisco, but Game 6 was looming on Thursday, April 24th at the Coliseum and the Sonics had lost all of two games at home in nearly two months.

Unfortunately for the home green and golds, Fred Brown (broken finger), Tom Burleson (knee), and Spencer Haywood (sprained arch) were all nursing injuries, meaning the team was going to need all the help it could get from its avid supporters.

With the hated Rick Barry (and you’ll see how hated later on) helping the Warriors get out to an early lead, aided by backup center George Johnson, who came off the bench to finish with 18 points and 15 rebounds, the mood amongst the 14,082 in attendance began to get grim.

But the Sonics wouldn’t quit, rallying to tie the game in the second quarter after trailing by as many as a dozen points. Haywood – still ailing, he would only finish with 8 points – watched from the bench as backups Tal Skinner and Rod Derline spurred the comeback.

The recovery was short-lived, though, and by halftime the Warriors were out in front by eight points. Golden State expanded their lead to double-digits in the third quarter, despite the best efforts of Seattle’s Slick Watts; the headbanded wonder turned in what Russell called “one of the great games in basketball,” finishing with 24 points, tying his career-high and marking only the second time all season he had tallied more than 20 points in a single game.

Watts’ tremendous play came at a price, as the diminutive young guard noted afterwards. “They hit me, knocked me around all night,” Watts told the AP later. 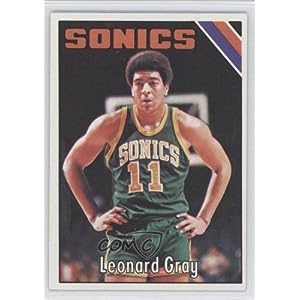 Not to worry; Watts’ physical abuse had not gone unnoticed by one Leonard Gray.

For that era’s Sonics, Gray embodied a role later inhabited by Danny Fortson, Maurice Lucas and Frank Brickowski – The Enforcer. While still a rookie, Gray wasn’t afraid of throwing his 240 pounds around. Tutored by Lute Olson and Jerry Tarkanian at Cal State Long Beach, Gray was a big, burly guy with a heart of gold (at least, from the vantage of his teammates and friends; Tarkanian called him “the meanest SOB I ever coached”). Seeing his point guard getting hammered and bludgeoned by the Warriors, Gray went to work, picking as his target the man everyone loved to hate – Rick Barry.

The Sonics had fallen behind by nearly 20 points when Gray and Barry began to tussle. Things got so out of hand that referee Richie Powers was forced to issue warnings to both players – either knock it off, or hit the road.

Well, Leonard Gray was never one to let an opportunity pass, and the possibility of getting the red-hot Rick (he’d finish the night with 31 points) Barry out of the game was just too tempting to pass up.

It was with that in mind that Gray issued the Rump Kick Heard ‘Round the Sound. With Barry facing the opposite direction, the Sonics’ O.G. kneed him in the hindquarters, following it up with a punch when Barry spun around, drawing an immediate ejection from Powers and, it should be noted, a roar of approval from the thousands watching courtside.

It didn’t end there. As soon as Gray exited the premises fans began pelting the court with coins and “other objects,” and events started to get crazy. Spurred on by another Sonic rally which cut the lead to single-digits, the fans were out for blood, and Rick Barry was beginning to look awful tasty.

When George Johnson blocked yet another shot in the final moments, sealing the Warriors’ series-ending victory, emotions got completely out of hand. The visitors scampered for the exits, their path blocked by unruly Seattleites intent on revenge. Half-filled popcorn boxes, beer, and soft drinks rained down on the visitors, and that was the least of it.

At one point, Barry, trying desperately to get to the locker room in one piece, felt someone pawing at him.

“I was leaving the floor and someone was kicking me and hitting me from behind,” Barry said later. “I turned around and it was a woman. I mean, I really couldn’t believe it.  I just swung around and pushed her out of the way. But if it had been a guy I would have hit her.

“This is basketball – what do they think we’re playing, soccer in South America?”

Other reports indicated the woman in question had smacked Barry with her purse and – as if that wasn’t enough – even tried to trip him. (To be fair, pretty much everyone associated with basketball in the past 40 years probably wanted to do the same thing to Rick Barry, and that includes his family). Worse, the affair turned truly ugly when fans, players, and police began to mix it up near the entrance to the Warriors’ locker room. In the end, a half-dozen fans were taken away in handcuffs.

The final side note for this crazy story would not emerge until a full six months later. On October 23, Spencer Haywood and Bill Russell settled their long-simmering feud by parting ways and Haywood was dealt to the New York Knicks for a draft choice, cash, and rookie forward Eugene Short; meaning the scant eight points he scored were his final contributions in a Sonic uniform. All the accolades, all the notoriety, all the hysteria of the Haywood Era had ended that night in Seattle with barely a whimper.

20 years later, Watts, who would emerge as a local favorite with Haywood gone, was a little less than complimentary to his teammates when he reflected on Game 6.

“The other guys didn’t come to play,” Watts wrote in his autobiography. “I came to win but the other guys just froze – they kind of choked on me. All our so-called ‘big scorers’ disappeared.”

And there you have it. A beer shower, a hailstorm of coins, Spencer Haywood’s swan song, Slick Watts’ coming out party, a purse careening off Rick Barry’s head – that was NBA playoff basketball circa 1975, and Seattle was falling for it harder than a love-struck teen with “Love Will Keep Us Together” on her bedroom radio.
Posted by PN at 8:48 AM

the woman going at Barry was Sonic guard Archie Clark's ladyfriend and Fred Brown defended her....

Holy cow, that's a fantastic piece of trivia - is that from your memory, or did you find that online somewhere?

I was there at the game...there was another incident with her and Referee Earl Strom if memory serves....RIP L.Gray

Great anecdote, mckoosa. I'm going to take a look at the Times archives to see if they have of the same info - but that really makes what was a good story into a great one.