Dino Rossi? You've got to be kidding me 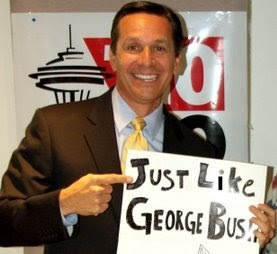 Like many of you, I recently received an email from the supposedly non-partisan group "Save Our Sonics" (whom a lot of us invested time and money with last year) with a special message from alleged number-one Sonics fanboy Dino Rossi:

"I proudly stood along the parade route in 1979 when the Sonics won the championship. I never wanted the Sonics to leave Seattle. Early this year, I was asked to remain silent on the proposed Key Arena renovation offer by representatives of the group of private investors so Governor Gregoire could support it without suffering political repercussions. But when I read the headline of the Oklahoman newspaper near the end of the legislative session that read 'Washington governor gives up: Official says there is no saving Sonics,' I knew we had to act and I publicly supported the public-private partnership. Still, Gregoire remained silent." - Dino Rossi

Does Rossi (a guy who openly hates the city of Seattle) really think Sonics fans are that dumb? Does he really think the working class fans of the Supersonics are going to vote for a guy who wants to lower the minimum wage just because he (supposedly) watched the '79 championship parade? Guess who else was at that parade? The Wheedle! Should we elect him for State Treasurer?

Worse, does Rossi really think Gregoire failed Sonics fans by not caving in to Clay Bennett's extortion demands? Anyone with half a brain (sorry Ho-Shu) knew from day one that Bennett had no intention of keeping the Sonics in Seattle. There is no way in high heaven Bennett would have allowed local business people to invest in "his" team.

As devastated as I was by the Sonics leaving town, I'm proud that the Governor stood up to Bennett the Bandit and told him where he could stick his $500 million dollar tax shelter. I love the Sonics more than any grown man should, but in the end, I'd rather wait a few years for a locally owned team playing in a renovated Key Arena.

Look, I know sports and politics go together like ice cream and dirt, so I have tried to keep my political views far away from Supersonicsoul (for instance, I have not once promoted my big "VOTE OR CRY" political comedy shows, next week on Nov 1st and 3rd--Be there!). I really wish S.O.S. would have done the same.
Posted by Paul at 10:00 AM

What, a politician manipulated facts to make himself look good? I'm shocked, I tell you! Gov. Gregoire would never do something like that!

Not that I'm a Republican by any means, but is it really that surprising that Rossi is trying to use whatever misleading tactics he can to win this thing? The saddest part is how irrelevant this whole arena issue has become - unless you look at it from the perspective that it's a done deal and both sides are for it, in which case it's the happiest part of the whole deal...

"Shame on Gov. Christine Gregoire and Rep. Frank Chopp for either not understanding or not caring about the future of the sport in this state."

I don't know, the Seattle Times seems to think she could have done a bit more to keep them around. Just keep up your whinning when you're watching your Oklahoma Sonics get their butts kicked and Gregoire's back in the governor's mansion. Good luck there to ya.

Man, I miss the days when people used to argue about Watson and Ridnour ...

OFF TOPIC: Don't know if you saw the NY Times sunday magazine article, but I thought you might like to see what I sent in response:

Oklahoma City in 2008 may be perfect for a new NBA city as “a smaller city on the rise.” Seattle was once that city. When the Supersonics arrived in 1967, they were the only game in town. They found their way into the city's heart by bringing home the only major professional sports championship in Seattle history in 1979, just after their short tenure lured businessmen to bring pro football and baseball teams here. 12 years later, with the nation and the world suddenly noticing our flannel-clad truth seekers and their explosive new music sound, our geek squads knocking out superior computer programs, our transplanted east coasters peddling tasty high test coffee, and our hop-lovers crafting handmade ales, this quiet corner of the country grew loud and proud in the 1990s – and so did the Sonics, winning more games than anyone not named Michael Jordan. During their 41 years here they served as a beacon, a bellwether, and a blessed escape from dark damp winters. The seamy, seedy, greedy manner in which David Stern and the Bennett posse ripped them from the fabric of our community left a gaping wound, no matter what those who would spin it otherwise now say.

Very well put, Chris. I've earmarked that article to read later on, hoping that it does more than just make me more bitter.

maybe next time Steve should involve Brian in such efforts.

As much as I have tried to pound Sonicscentral with unsolicited advice they, or at least Steve, just could not contain himself.