Here's a trivia question you can use to stump your friends the next time you're hanging out at Oskar's:

Can you name the six players who have held the title as all-time leading scorer in Sonic history?

(Answer below. Also, a sidebar: Assume for the sake of brevity that the all-time leading scorer race commenced at the end of the inaugural 1968-69 season; otherwise, we wind up with a dozen guys from the first season jockeying for first place and it becomes a jumbled mess).

To help you in your decision-making, recall that on Feb. 26, 1978, Fred Brown became the leading scorer in Sonic history, passing Spencer Haywood's old record of 8,131 points. Brown tallied 32 points as the Sonics edged Philadelphia 99-97 in a come from behind victory.

Of note, Coach Lenny Wilkens was ejected for arguing with officials ("I guess I lost my head," the normally placid Wilkens said after the game), the first time in his career (playing and coaching) that he had ever received that dubious honor. Also of note, Philly Coach Billy Cunningham received the heave-ho as well.

Brown provided the winning score with 18 seconds left on the clock just as the 24-second clock was about to expire, helping the Sonics eliminate what had been a 16-point third quarter deficit. The Sixers had three chances to tie the game in the closing moments, but Doug Collins (!), Daryl Dawkins (!!), and Julius Erving (!!!) all came up short.

And now, in case you couldn't come up with the six, here's a handy-dandy graphic with all the details. 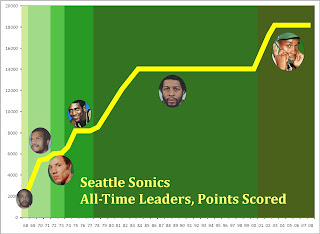