Too Big To Fail: Why the Seattle Supersonics and Sacramento Kings both deserve to live 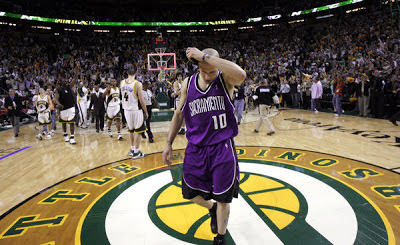 Things are getting ugly between basketball fans in Seattle and Sacramento.

After the latest fold in the Kings Drama last week, my Twitter feed was filled with one common hashtag: #eatshitseattle .

Oooooookay?  I know this sort of situation brings out the worst in sports fans, but the Über trolls on both sides have smelled blood and are engaged in a battle to the virtual death, bringing back painful memories of 2008 and the horde of OKC enthusiasts who came out in droves to piss on Seattle's basketball grave.

The irony, of course, is that fans have zero influence on the outcome of these sorts of dilemas, so while we bludgeon each other with zingers and hashtags, the NBA fatcats count their money and enjoy the show.

Instead of fighting each other, we should acknowledge that both cities have incredibly enthusiastic fans and, more importantly, incredibly rich investors begging to give the NBA boatloads of money. So why should either city be left out in the cold? Why not keep the Kings in Sacramento and award an expansion team to Seattle?

People will argue that expansion will dilute the league, but with the explosion of international basketball over the past two decades, there has never been a bigger pool for talent. Naysayers also protest the idea of the NBA having an uneven amount of teams, but as Tom Ziller brilliantly pointed out in detail back in January, the league has often operated that way and somehow survived.

The only reason the NBA hasn't fixed this mess is they love drama.  It drives ratings, ticket sales and fan interest. And as we fight online crusades against imaginary foes from other cities, it's clear this whole kerfuffle is as authentic as the WWE, with the Board of Governors Meeting on April 18th being our Wrestlemania.

Basketball fans on both sides need to stop fighting each other and acknowledge we are all being exploited. The NBA could end this right now by awarding Seattle an expansion team. The only question is whether David Stern wants to play the hero or the heel.

Aaron Levine made the same point the other night:

Just wanted to say that, in some respects, the main reason I've gotten into back and forths with Sonic fans (because I am a Kings fan) is mostly because some insist on applying horseshit rhetoric that Seattle is justified in stealing a NBA team.

Sorry, justification of "stealing" a team is a waste of time. Those who have the resources will have a NBA team. There is no need to discuss anything else IMO.

Should the NBA have left Seattle? No.

What Kings fans have a legitimate anger over, IMO, is A) telling us what to do with the running of our city and B) that Sonics fans are owed a NBA team because they were wronged.

First off, it's stupid for us to tell how Seattle to run itself. As far as I could tell, and that includes having lived there for 5 years, Seattle runs itself just fine. Or as about as well as you can anyway. So, in that case, doesn't it stand to reason that Seattle fans shouldn't be telling Sacramento whether or not a subsidy makes sense? Especially on a Kings fansite no less?

I know there are idiots in every fanbase. You aren't responsible for Seattle idiots anymore than I or any other reasonable Kings fans are responsible for our share of idiots. But I think people on both sides would very much like the Kings to stay in Sacramento and Seattle to get an expansion team.

With all the issue's flying around, it's easy to lose sight of the fact that no matter how much there has been denials of expansion by the NBA, it's quite possible they will consider it by the time the smoke clears and all things are considered.

Either way, Paul I just wanted to say I totally 100% agree with your piece you wrote here. It summarizes what many on both sides truly feel. Despite what I've said to a few Seattle fans that are being seriously ignorant, most fans on either side are not that, and are smart enough to stay out of the war zone. (Which is silly on all levels.)

Thanks for writing a piece of sanity is my main point after the rambling noise just above. :)

One thing you didn't mention is the primary reason the NBA owners don't want an expansion team. It all comes down to money. Media contracts are a large and growing source of shared revenue for the league. The owners don't want to dilute their share by cutting in another team. Also they assume that an expansion team will take several years to become a solid contender and during that time it will likely be on the receiveing end of the general revenue sharing. Bottom line is they don't want to do any more sharing of the pie.

I agree that diluting the talent pool is probably not as big a worry considering that overseas programs for developing young players are expanding and putting more talented candidates into the pipeline. Based on the all-star weekend press conference though it seems like the next commisioner doesn't see it that way even though Stern does.

@Nathaniel - thanks for the comment. I agree with you 100%. If any Seattle fan is saying the things you said they did, they are horrible people. Sometimes when I hear stuff like that, I want to think maybe they are just trolls from other cities trying to stir shit up. But then again, losing a beloved team (or even the threat of it) can drive some people crazy I guess.

Anyway, glad to be the voice of reason for Seattle--hopefully we're not the only one!

@ bademus - Good point! However, wouldn't the overall revenue pot increase with the addition of a major media market? Also, if past Seattle expansion teams are any indication, I think they would get huge crowds for at least the first few seasons, as the bandwagon fans around here love jumping on the hot new thing (see: Sounders, Storm).

Stealing last time I checked when a team is sold money exchanges hands stealing would be if no one paid for it. I understand sacs pain but I have been in str and all I see is sac fans blasting Seattle calling us trolls well to be honest if we are trolls you guys are whiners.where was all this support when you guys were having losing seasons were is that support being in the last place in attendance.I no longer wanna hear oh we sold out 19 of 27 season because its getting old.true fans attend games not because of the owners but because of the players if their is anyone to blame for any of this its the fans of sac for not attending not giving the owners a reason to invest in the product yes don't get.me wrong I don't like the maloofs but I love the kings I love my sonics as well that's why this situation is hard for me