The best way to deal with overwhelming guilt, anxiety and uncertainty?

At least, that’s what we’ve been taught since grade school, anyways. So, with that in mind, here’s some fantastic and not-so-fantastic items currently available to the discerning Sonic shopper.

Seattle Sonic Starline Poster: $15
Featuring Det, Reignman, and the Glove, it’s a classic piece of mid-90s nostalgia. At $15, it’s a decent deal for a 22” x 34” poster you know would look great in any rec room.

Sonic Warmup Jersey: $50
Oh, my. Just … I’m not sure what to say about this one. Set aside the value – it’s $50 for a warm-up jersey, so you can’t quibble too much about the price – but, that picture? Why that expression? Why do I get the feeling that the poser is a TrailBlazer fan that lost a bet? Why does he feel the need to show us all of his chins? And why is he looking at his feet in the reverse picture? What’s down there, Joe? Did you step in something? Or are you just wondering how you got to this point in your life? 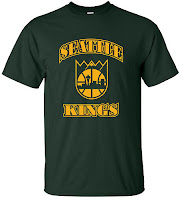 Sonic/Kings Jersey: Do not buy this
To the seller(s) of this piece of annoyance, on behalf of every citizen of Sacramento and Seattle, and anyone who has ever been a fan of either team: Go to Hell, just go. In all honesty,  can anyone fathom who the target market is for this obscenity? No one in Seattle or Sacramento would ever wear this in public, so I'm struggling to figure out who they expect to buy it. 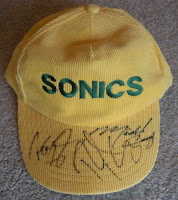 Autographed Hat: $10
So, you’ve got a corduroy hat signed by Michael Cage, Rich King, and a mystery Sonic. The question you’ve got to ask yourself: Would it be worth more if Rich King hadn’t signed it? And who is the mystery Sonic? Could it be Bart Kofoed? Would that make it worth even less than $10? 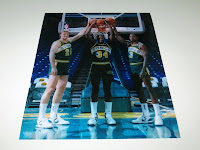 X, Tommy, Dale 8 x 10: $5
I sometimes wonder about the process that goes into making these staged photos. For example, in an ordinary circumstance with another set of three great NBA players, where none of the three is truly superior to the other two, you’d think there might be some awkwardness as to who gets to stand in the middle, right? I’m guessing this did not happen with Xavier McDaniel, Tom Chambes, and Dale Ellis:

Photog: Okay, who wants to stand in the middle?
Tom: Well, I’m the tallest, so how about me?
X: Looks at Tom.
Tom: Yeah, I think I’ll stand on the side.
Dale: Coughs.

Playoff Ticket - Sonics/Nuggets: $5
Yes, it's from that game. The ticket doesn't say Game Five, but it does say Game C, which makes it painfully obvious that this is an unused ticket from the most horrific game in Sonic history. I think it's worth $5 just to buy it and perform an exorcism. Maybe you could get Dikembe Mutombo to perform part of the ceremony.
Posted by PN at 11:35 AM

I remember that pic with the Big Three. I wonder if they were supposed to crop out the bottom part of the picture so it actually looked like they were dunking and not just posing awkwardly in front of a six foot rim.

At least 5 morons have purchase one of these...