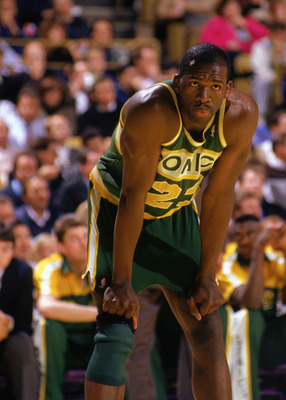 Former Seattle Supersonic Olden Polynice was once a fan favorite in this town. Today? Not so much.

The retired center, who played for the Sonics from 1987-1991 and again for a brief stop in the disastrous lockout season of 1998-99, made a few comments on Twitter about supporting the Kings (another former team of his) staying in Sacramento. Then some over-zealous Sonics fans went ballistic. And then this happened: 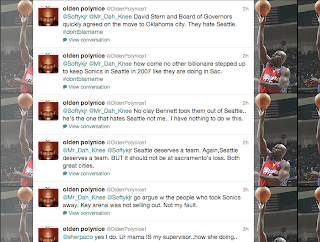 Polynice and Hawes both played for NBA teams. They weren't community ambassadors. They weren't public servants. They were employees. Hawes did not choose to work in Sacramento, just like Polynice didn't choose Seattle. They went there because their jobs forced them to. Olden doesn't like Seattle? So what? Sometimes I don't like Seattle, and I've lived here all my life!

Whether it's Polynice, Hawes, Nick Collison or your annoying neighbor, most sports fans have pretty strong feelings about their favorite team. And if you don't agree? Tough luck.

Don't get mad at O.P. for saying the Kings should stay in Sacramento. Like everyone else, he has a right to root for whoever he wants in this drama.

Besides, real Sonics fans know that this is the only  reason you should be mad at Olden Polynice.
Posted by Paul at 5:31 PM

You missed the comments that he made yesterday about the Seattle Fan Base. That was the root of this "discussion"

Did you post my police joke he blocked me on?

No, I totally he get he went too far there, but I also think Sonics fans sort of goaded him into going scorched earth just because of his initial comments about how the Kings moving to Seattle is as bad as the Sonics moving to OKC. (I don't agree, but I see his point, and would probably feel the same way if I lived in Sacramento.)

BREAKING: Seattle trades Pippen for Polynice and the rights to a 1974 Ford Pinto