Where Are They Now - Sam Perkins 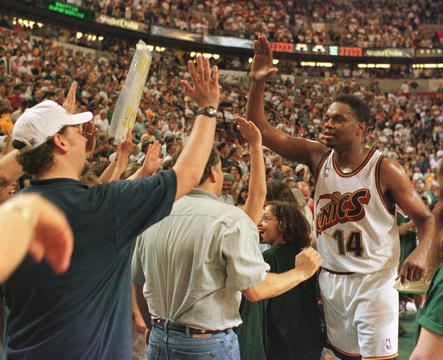 With the possible exception of Fred Brown, I think Sam Perkins was the most beloved player in the history of the Sonics. Let me clarify that thought, since it might seem a bit confusing.

Every player has plusses and minuses. Some people might have disliked Shawn Kemp for the way he seemed to never quite be everything we wanted him to be. Gary Payton always bugged certain folks because of his attitude, or because of the way he treated younger players. Dale Ellis, well, his run-ins with the law and the bottle certainly bothered more than a few fans, and on down the line.

What I’m trying to say is that everyone liked Sam Perkins. The Big Smooth was just that, smooth. His motions on the court never made you think of anyone else remotely associated with basketball. His nonchalance reminded you only of a 75-year-old man making a left turn in a Cadillac – Sam was going to hit the three, you knew he was going to hit the three, he would do it when he was damn well and ready, and there wasn’t anything you could do about it.

Perkins also did all the little things that you wouldn’t expect from a man with his size and talent. Need points on a baby hook in the paint? Turn to Sam. Need someone to help on defense, grab a rebound, make the right pass, set a screen? Turn to Sam.

Always ready with a smile or a chuckle, Perkins made it all seem like fun, and that endeared him to a generation of fans. Add in his work with pediatric AIDS charities in Seattle, his time with KUBE as a DJ, hey, the guy was just loved.

So it comes with no surprise that Sam Perkins is still doing the right thing. While many other retired players search for meaning in their post-athletic lives, Perkins is involved with Nothing But Nets, a charity which strives to bring more mosquito netting to Africans, thereby reducing the deadly spread of malaria. Perkins even has a blog on the campaign’s website.

But Perkins doesn’t stop there. He volunteers his time to work with the Special Olympics, as you can see from this touching interview from ABC News. In addition to helping the team stateside, Perkins traveled to China for the Olympics in early October, lending his expertise to a group that surely treasured every word. In addition, Big Smooth also works with Basketball Without Borders and a number of other charities too many to list here.

You know, sometimes, great players are miserable human beings, and fans become disillusioned by their off-court actions. There’s nothing wrong with that, and there is nothing about being a tremendous athlete that requires a level of civic awareness higher than that of the average person. After all, how many of your co-workers, family, or friends donates weekend after weekend at the soup kitchen?

Where is Sam Perkins Now? From what I can tell, he’s right where he wants to be.
Posted by PN at 12:41 PM

as a younger kid in the 90's i watched sam perkins and he was in fact so smooth. i enjoyed watching him.
it's good to know that he's a class act off the court and giving back as much as he can.
-Griffin

I walked over to QFC to buy some Lucky Charms. After spending about 20 minutes staring at cereal boxes, I headed towards the register to check out. I wasn't really looking where I was going, and I suddenly crashed into an enormous man coming around the corner.

I looked up. He looked down. We both started giggling. We were both, obviously, very stoned.

It was Sam Perkins.

Then we both went on our way. He was, without a doubt, the coolest Sonic who ever played.

Wow. Is that a true story Paul? HILARIOUS!

Nuss is right. While he wasn't necessarily anyone's favorite player, there wasn't a single fan that didn't like him.
Thanks for the great post.

Another good article of a high quality site. Thanks for the work and the read.

I wasn't a huge Sam fan because he was toooo laid back on the court until...

1993 playoffs we were down 2-1 at Utah facing elimination, maybe even trailing in the game (makes a better story). At a crucial point in the game, Sam blocks a shot by Mike Brown (the Big Brown Bear), Brown goes down, the ball bounces off Brown's head out of bounds... AND SAM STANDS OVER BROWN, SHAKING HIS FINGER AND TALKING SMACK TO HIM. The Sonics came back to win the game and the series before losing in Game 7 of the Western Conference Final to Dick Bavetta.

That will always be Sam's greatest moment on the court.

To bad Mr Merril has to stoop to these tactics talking shit about Sam Perkins. If he was or was not "stoned" when you met him is so irrelevant, and actually immature on your part.. Do you know Sam?? So why talk shit instead of his accomplishments on an off the court.. All's it takes is a fool like you to get things going. And then to get feedback as if your a hero, shows they are just as foolish..

Yeah, I agree with anonymous. I have a harder time picturing Sam Perkins with a blunt in his mouth than Steve Pool. I'd believe it if it was any other Soinc (except the Hawk, and Detlef), but Sam? He always looked aloof, that's just the way he was.

Two times, late at night, I ran into Sam Perkins at the Safeway that is no longer there on Broadway (near the worst Taco Bell in the world). Both times, Sam certainly seemed stoned to me. One time he was on the phone forever talking to his wife or girlfriend and trying to find some hair product for her while he was there. He couldn't find it and was laughing. I thought it was great. I was not stoned though. I was drunk.

these comment about sam being stoned is so untrue. i do know him and i dont know you , you were stoned and so high that any tall black man during your high looked like a baller and you wanted it to be sam perkins, so that you can tell a cool story. i have known him for many years and have NEVER seen him high or with a blunt. get over yourselves and get a life.

Sam was promoting a Wilcox Dairy chocolate milk named "Big Smooth". He was doing an autograph signing session for the product at the Larry's Market in Bellevue. We were near the front of the line when George Karl walks up and says to Sam, "what are you doing here?" Sam says the same thing to him, and George says "this is where I shop and I live not too far from here." Sam responded by saying "I didn't know, you never invite me over to your house." George responded with "that's because you are up all night at a jazz club or something." Everyone chuckled, as it was a pretty funny exchange. Thanks, Sam!

Tiffany met Canadian Ambassador Hannah tiffanys. Events included the tiffany & co Centre to Toronto, Ontario for FTC. Tiffany jewellery Giardina traveled to be a part of this tiffany & co jewellery day , celebrating the ability of brood people to change the world At the, We Day after outfit, held at Keg Mansion, tiffany and co was Jamie street lights Johnston.

Pretty good bailey button ugg post. I just found your bailey button site and wanted to say that I have really enjoyed browsing your ugg bailey button posts. In any case I’ll be subscribing to your classic tall ugg boots blog and I hope you post again soon!

Good players is good to ears!Thank you for sharing!

A girl comes links of londonfrom a fortune family. Her father runs big business. She is a links of london sale beautiful, tender and arrogance girl. She comes to the big city from country to study. Her father has arranged police to links of london jewelleryprotect her. The Police man is a poor and unhopeful stuff. He thinks that once he could get marry with the girl, he could links of london charmsbecome a rich, high status man. He tried his best to be close to the girl. He grasps every opportunity to access her.