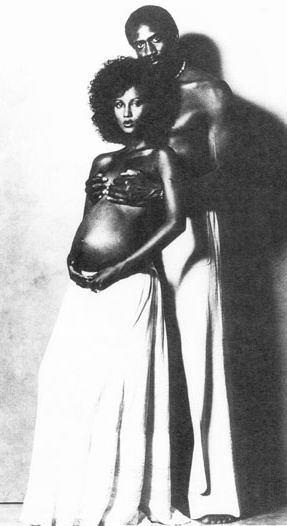 Five things you may not have known about Spencer Haywood.

1. He spent one year at Trinidad State Junior College in Colorado before transferring to the University of Detroit.

2. Was married to Iman, giving me the excuse to run the picture at the top of this post.

3. Won a championship ring with the Lakers in 1980. The team the Lakers knocked off to reach the Finals? The Seattle SuperSonics.

5. Kareem Abdul-Jabbar was the best man at his wedding to Iman.
Posted by PN at 8:43 AM

Very cool. Thanks for the info.

Man, I was just thinking of Spencer Haywood the other day. Specifically about a commercial he did for KJR back in the 70's. All I can remember is him saying "This is Spencer Haywood, and on my knee is a cast" then he knocks on the cast a couple times. That tore me up as a kid... I have a bigger dilemma now though. Who the hell am I gonna root for??? I left Seattle some years ago and now live in Chicago, but no way am I going to get behind the Bulls. Any suggestions? And - no I am not replacing my SuperSonic loyalties with that team 3 hours to the south. Uh Uh - no way!

The Sweetest New Bridal Gowns
All of the top designers have just shown their latest collections of bridal gowns for next spring. Many of the styles were outrageous and dramatic, but there were also some wedding gowns that were unabashedly pretty and feminine. For more on the sweetest new bridal gowns, read on...

It seems as though many of the gown designers this season were so crazy about trying interesting new techniques to rucsh, gather, and ruffle fabric that they forgot about making dresses that a bride would actually feel pretty wearing. Some of the more adventurous styles might make a woman feel chic or bold, or even glamorous, but many of the new gowns bear little resemblance to the timeless bridal gowns that every young girl dreams of one day wearing. In other words, they are so of the moment that they are not timeless.