You might recall earlier stories I ran about how Aubrey McClendon is battling the Saugatuck Township about his proposed redevelopment of a cherished part of Michigan's lakefront.
After buying the property, McClendon anticipated putting up a whack of McMansions, flipping the properties, and walking away with a bundle. (Astute readers will remember that McClendon fell in love with the area whilst jetskiing on vacation).
Anyhow, due to various reasons, the plan has stalled, with one of the major impediments being the assessed value of the land. In response to the township's assessement, McClendon first appealed, then lost, and has since filed multiple lawsuits, with the sole aim of making the township knuckle under to his desires, those desires being the re-zoning of the property in such a way that he would be able to build the mansions he wants.
In the methodology utilized by so many billionaires before him, McClendon has opted to bleed the township until they cave in. With that in mind, the Saugatuck Dunes Coastal Alliance has decided to publish a coffee table book with beautiful photos of the dunes — with all profits going to a legal fund to help battle McClendon (via Publisher's Weekly).
Entitled The Saugatuck Dunes, the book has already sold 500 copies at $35 each, and has drawn the interest of an independent bookseller in Chicago, among others. If you're interested in 1) purchasing a beautifully done book about a unique part of America and 2) striking a blow for regular folks battling an evil billionaire, here's the link at Amazon.
Posted by PN at 9:07 AM 7 comments:

Turns out that Steve Nash & Co. will be making an additional stop on their "Ye Olde Towne That Our League Hath Left" Tour. Various Canadian outlets report today that the Suns will do battle with Portland in Vancouver on October 22, one week after the much-discussed October 14 matchup at KeyArena.
Does this mean that the KeyArena event is a non-starter? Blazer coach Nate "Mr. Not-So-Sonic" McMillan intimated as much in an earlier interview, and this new scheduling lends credence to the thought that perhaps the NBA overestimated Seattle's ability to forgive and forget.
Tickets go on sale for the Vancouver game on August 8th, but I don't know what the story is for the Seattle game.
UPDATE
Looks like my suspicions were correct. Percy Allen from the Seattle Times reports that the Oct. 14 matchup at KeyArena has been ... canceled.
Allen tried, but was unsuccessful in getting Portland's front office to admit they canceled the game because they knew a sizable amount of bitter, twisted old Sonic fans would show up with NSFW banners with various combinations of "Stern," "Bennett," "Sucks," "F$#@," etc., etc.
Instead, Portland President Larry Miller told Allen, "We were looking into it, checking into and thinking that it was going to work out, but at the same time we were looking at some other options for that game." And, as a result, the Blazers will now play Oct. 14 in Portland, at the Memorial Coliseum.
So let me get this straight, the Blazers, who are desperately wooing Seattle fans, and are aiming to broadcast their games on radio and possibily TV in Seattle this season, decided the best possible way to lure ex-Sonics fans into the Blazer fold was to cancel their only visit to Seattle and replace it with a game in ... Portland?
In what universe does playing a early pre-season game in Portland make more sense than Seattle, from a business perspective?
I'll tell what universe: The universe where the NBA refuses to acknowledge that there is anything but unconditional love of their product. The universe where David Stern refuses to admit that he made a colossal PR blunder in removing the Sonics from Seattle. The universe where Mr. Stern loathes any possible hint of negative reflections on his disgraceful conduct.
That's the universe we're talking about, no matter what Larry Miller says.
Posted by PN at 2:41 PM 6 comments:

Kevin Calabro, one of the few people in this town to actually say "no" to Clay Bennett, is profiled in the Seattle Times today. It goes without mentioning that KC was (and is) an inspiration to Supersonicsoul, so it's nice to see him getting some props. Warning: this article will make Sonics fans both nostalgic and incredibly depressed. But it could also make you a Sounders fan (if you aren't already).

Email ThisBlogThis!Share to TwitterShare to FacebookShare to Pinterest
Labels: graphs 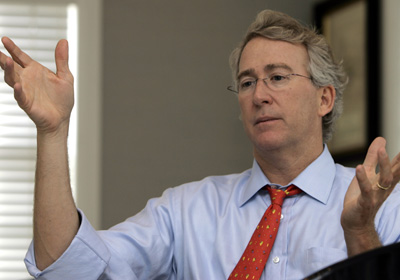 I understand, Oklahomans, that McClendon performs a myriad of civic duties, that he certainly does not always act in the manner befitting someone on the verge of bankruptcy. So, please, withold your diatribes about how we're a bunch of losers focused on a team which no longer belongs to us. Instead, ask yourself this question: With the economy in peril, with gas prices showing little signs of improvement, and with McClendon financed to the gills (and if you think his $112 million payday in December had anything to do with anything other than enabling him to make his debt payments, quit fooling yourself), how much longer can he continue to operate?
Posted by PN at 12:56 PM 18 comments:

David Locke, ertwhile blogger, Sonic radio man, and a friend of Sonic fans, has been tabbed to succeed the legendary "Hot" Rod Hundley as the voice of the Utah Jazz.

Locke, who came to Seattle from Utah before returning two years ago, was one of the first of the local media to delve into more sophisticated analysis of basketball statistics (and, for all I know, MLB and NFL stats; I wasn't paying as much attention in those areas).

While I didn't agree with everything Locke said - he got awful wound up sometimes - and I never thought he fit comfortably into the play-by-play chair, that could be attributed as much to the man he replaced as it did to his skills. It's never easy to replace a legend, and now Locke has managed to try to fit into yet another pair of oversized shoes. First Calabro, now Hundley ... what's next, Locke, a shot at taking over for Vin Scully in Los Angeles?

In all seriousness, congrats to David for his promotion, and best of luck.
Posted by PN at 9:46 AM 10 comments:

Amount of time it took Mr. Kelley to write his column: 1 minute, 38 seconds

Amount of time you should waste trying to think of any conclusions other than, "David Stern will say whatever it takes to further advance the agenda of David Stern": 0 minutes, 0 seconds
Posted by PN at 1:40 PM 6 comments:

As much of a Nate McMillan fan as I am (and I am a huge one), he's really beginning to test my patience.

For evidence, see this latest quote from 'Mr. Sonic':

"The fans of Seattle have really become Blazer fans. Some of them up there of course still love the Sonics but because we have a lot of guys from Seattle area, we do have a fan base there."

Set aside the sheer inaccuracy of his statement (the fans of the Seattle have really NOT become Blazer fans, regardless of how much effort the Portland marketing staff makes), is it really necessary for him to say these things? At what point do we stop wondering if this is Nate trying to placate his present employer, and start wondering if he really has a bitter attitude towards all things Sonics after his messy departure four years ago?

McMillan endeared himself to a generation of fans with his on-court tenacity, selfless devotion to the team, and his no-BS style as a coach. He was a key contributor to all of the great Seattle playoff runs of the past 25 years, and if you had asked five years ago if there was any way I would ever consider throwing away my McMillan replica jersey, I would have laughed in your face.

And then spit in it.

I'm not saying we should go crazy and cut the Mr. Sonic sash from his chest, but, at the very least, perhaps we should open the utility drawer and remove the scissors.
Posted by PN at 10:12 AM 12 comments:

Imagine you're Tim Wilkin, a writer for a smallish paper (The Times-Union of Albany, New York), and you've scored an interview with former resident/basketball star Sam Perkins.

Now, if you're Tim Wilkin, you're just a hair nervous, in that Sam Perkins 1) is more famous than just about anyone you have ever interviewed and 2) exudes more cool through his left pinky toenail than you do through your entire body.

So, if you're Tim Wilkin, you're hoping your Q&A with Big Smooth can at least get off to a solid start, because, man, you're more nervous than a Clipper fan with a $250 Blake Griffin jersey.

And then this happens:

Q: Coming back to be inducted into the Capital District Basketball Hall of Fame ... is that a neat thing for you?

A: Is it neat? I haven't heard that word in awhile. It's cool.

Perkins manages to help Wilkin along by not hanging up the phone after one cliched question ("Who was your favorite teammate?" "What are you doing now?") after another (all of which begs the question: Do they have the internet in Albany yet?).

Not surprisingly, there was nothing too revelatory in the article, although it was a bit of a surprise to see Sam Perkins list Dick Motta as his favorite coach, putting him ahead of (among others): Dean Smith and George Karl.

One aspect emerged for sure, though: Sam Perkins is definitely not neat.
Posted by PN at 10:44 AM 4 comments:

If you're in the neighborhood, please stop by the "All-American Salute to America, USA" tonight in Ballard at Live Girls Theater (2220 NW Market St) at 11pm. I will be hosting an ultra-patriotic late night comedy show featuring some great local performers including the 2009 Stranger Gong Show Winner Airpocalypse. For more info, go to www.ballardcomedy.com