To those reared on Payton, Kemp, and Karl, the name Zollie Volchok might not ring any bells, but Zollie Volchok, who passed away Sunday night, was an integral part of the early days of Sonic history, and also played an important role in the championship years as well.

Volchok, who was 95 years old and was born Zalmon Marcola Volchok, came to the Sonics in the 1969-70 season as the team's interim Supervisor of Operations and remained with the club in various positions for many years afterwards. He was brought back to the Sonics by owner Sam Schulman for the 1977-78 season as the team's Executive Vice President/General Manager and remained with the club through the 1982-83 season. Ironically, he was named the NBA's Executive of the Year in 1983, the first such award in the franchise's history (he was joined by Bob Whitsitt a decade later as the only two winners in Seattle's history).

Volchok's role was a unique one, and completely different than the one expects from an NBA GM in today's game, as he left the on-court talent business to Bill Russell or Lenny Wilkens while he handled the business side of things. In Wilkens' book "Unguarded," there are numerous stories of trades that didn't happen (Fred Brown for Earl Tatum or Tom Burleson for George Jonson) or draft picks that didn't get picked (Ernie Grunfield instead of Jack Sikma), and Volchok routinely let Wilkens handle that side of the Sonics' affairs, trusting that a former NBA player and coach would no more about basketball talent than a guy who spent his formative years in vaudeville.

Volchok's background was in the entertainment business, everything from roller derbies to Frank Sinatra and few things in between, and he did considerable work for the Variety Club. Despite a lack of basketball knowledge, Schulman trusted that Volchok's ability to get people to attend events would prove useful with the Sonics.

Schulman's trust proved accurate, as Sonic attendance increased and Volchok eventually wound up owning a 5% share of the club. He is survived by his wife of 72 years, Sylvia, and sons Gary, Michael and Tony.
Posted by PN at 12:15 PM No comments:

Spencer Haywood and the Hall

The Basketball Hall of Fame announced its list of candidates for 2012 induction today, and they failed to include a former Sonic who spent quite a bit of time proclaiming that he was going to be inducted this year:

Reggie Miller, Rick Pitino, Bill Fitch, Katrina McClain, Maurice Cheeks, Bernard King, Dick Motta, Don Nelson, Hank Nichols, Ralph Sampson, Jamaal Wilkes and All American Red Heads make up the entire list, and no matter what you think of the merits of Ralph Sampson (I know, it's ridiculous, but, hey, that's the Hall), it can't be argued that somewhere along the lines, Spencer Haywood either 1) Got some bad info from someone or 2) Was blowing smoke.

(Also, if you had some bad shrimp yesterday and need to get it to come up, just think about this: Phil Knight is also getting inducted this year.)

What does this all mean? Very little, honestly, except for Spencer Haywood, obviously. It's not as though he can't get elected some time next year or the year after that, and given the Hall's byzantine and, frankly, nonsensical standards it's not beyond the realm of possibility that we could very soon see Haywood's name up there with Jabbar, Jordan, and Johnson.

It looks like KING 5 is going full-blown WEATHERBLAST 2012 with the new Seattle sports arena story, dedicating an entire hour of prime-time to a special news report:

The three-part hat trick Jean and Paul explore:
KING 5 examines details of the arena plan including the private financing proposed and its potential impact on taxpayers as well as the future of Key Arena.   Jean and Paul will also report on the personalities involved, from Seattle and King County politicians to the Seattle native and self-made multi-millionaire Chris Hansen who’s behind the mega deal.

KING 5’s Chris Daniels reports from Orlando, where the NBA All-Star game is taking place this weekend.  The NBA and Sacramento must make a decision soon about the future of the Sacramento Kings franchise.  The special will also feature reports from Phoenix and New Orleans, two areas where sports franchises face uncertain futures.

Damn. If Jean Enersen is involved, you know Shit Just Got Real ™.

Not Being a Douche: Sonics 2.0 Fan Edition

I won’t speculate on what will be announced later today (or next month, or next year, or… ever) regarding a professional basketball team returning to Seattle. I can say that whatever it is will have to factor in these two certainties:
Better writers than I have examined the dilemma this creates for Supes fans. On the one hand, you’re still mad that your team got took. On the other hand, you know that to have a team again, you have to take one from someone else.

If you’ll forgive another awful sports analogy, it’s like needing a heart transplant. You hope you get one, but it is beyond macabre to actively root for another person to die. But if one does become available, it’s not like you would say “No thanks, I’ll wait until science is able to clone hearts and sell them at Costco.” (note to self: a cartoon might have worked better here)

So what can we do? We are constantly assured that Seattle will get a team back, from somewhere, sometime. What we can do, when/if that day comes, is steer clear of gloating douchebag territory. Having been the recipients of scorn from Other Klassy Citizens these past 4 years, I’ve been mentally compiling a list of tips for avoiding their habits when the situations are reversed.
Non-douchey additions/suggestions welcome.
Posted by chunkstyle23 at 11:37 AM 7 comments:

Mayor McGinn (looking eerily like John Wayne Gacy in this photo) is reportedly going to have a press conference at 2pm today about a potential new NBA / NHL arena for Seattle. Stay tuned to Supersonicsoul for the latest news and/or handwringing about ARENA GATE 2012!
Posted by Unknown at 9:35 AM No comments: 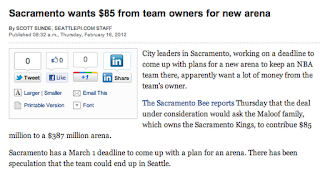 Wow! Either an unpaid intern at the P.I. forgot to add an "M" on that headline, or new arenas are REALLY cheap in Sacramento!

UPDATE: Three hours later and it's still not fixed. I am really the only person that still reads the P.I.?
Posted by Unknown at 9:22 AM No comments:

Supersonicsoul sources tell us there might be a big announcement on Thursday about a potential new NBA/NHL arena and maybe a little more about plans to bring an NBA and/or NHL team to Seattle:

A news conference is set for Thursday at City Hall to announce details around a potential new NBA arena deal in Seattle, according to reports.

Christopher Hansen, the Seattle-born hedge-fund manager behind the project, is currently in Seattle,King 5 reports — and may be ready to reveal more about the possibility of the NBA returning to Seattle.

Hansen owns property south of Safeco Field, and has reportedly been developing a plan with the city and the NBA for a year. If Seattle were to get the Kings, the team could play at KeyArena — the Sonics’ old home — on a temporary basis, until a new venue is finished. Before the Sonics even left for Oklahoma City, and became the Thunder, the NBA had declared KeyArena an unsuitable venue.

It’s unclear if Thursday’s news conference will answer whether Seattle will soon have a new NBA team, but Hansen and Mayor Mike McGinn have an announcement regarding a new sports complex, according to reports. The news conference is scheduled for 2 p.m.Read the rest here.