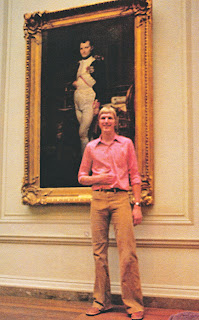 Including, as you might have guessed by now, the remarkable one shown above, depicting Jack Sikma in front of a painting of Napoleon Bonaparte. The photo was taken during the Sonics' practice time after the conclusion of the Western Conference Finals and before the start of the NBA Finals (photographer unknown; although it is one of the following four folks: Dave Hood, Tim German, Tom Moore, and Meg Anstett).
Posted by PN at 12:11 PM 1 comment:

Battle of the X-Man Tees

So you're looking through Ebay for a the perfect shirt to wear to this year's Sonic Celebration Night at Safeco Field, when you come across two utterly perfect options.

But which to choose? There's Option A: 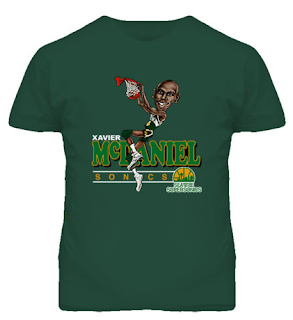 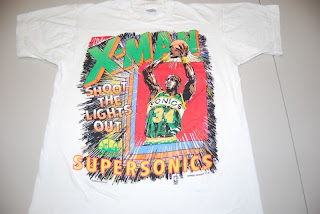 So tough to decide, right? With Option A, you've got classic late 80s nostalgia, while with Option B you've got a shirt almost no one ever saw, guaranteeing you righteous head-nods from your fellow hipsters at Safeco.

It's a ridiculously difficult decision, but I'm going with Option A, if only because by putting it on I'm instantly transported back to 1987 and the great times Sonic fans had watching X, Tommy Gun, and Dale.

Online Surveys & Market Research
Posted by PN at 8:54 AM 4 comments:

Official "Not In Our House" Music Video with Sir Mix-A-Lot. I was the producer and editor of the video and just found the tape in my garage last week. Brings back memories for sure. Just thought you'd like to see it.

Too many cameos to mention but a few favorites: Bob Kloppenburg and the Fabulous Sports Babe. The mind boggles . . .
Posted by Unknown at 10:27 AM 8 comments:

A great story at for Sonic fans at SportsPress NW today, detailing (and that's an understatement) the process that brought the Sonics to Seattle.

Penned by Dave Eskenazi and Steve Rudman, the story fills in a number of gaps in Sonic history, as well as providing some colorful highlights to pro basketball lore in this town. Just for example:

* The first Sonic booster club was called the UltraSonics, which immediately makes me wish we could rename this blog, like, now.
* Dick Vertlieb (one of the Sonics' founders) wanted to dress the Sonics in blue and gold to entice Olympia Beer into becoming a major advertiser.

And those are just appetizers for a delicious story. True Sonic fans would be remiss not to read the whole thing.
Posted by PN at 3:08 PM 1 comment: