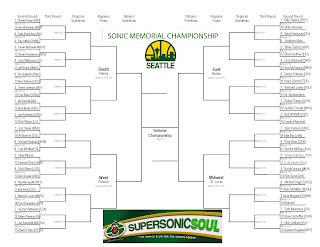 If you haven't already figured it out, we've replaced the competitors in this year's NCAA tournament with Sonic players and coaches who were either alums or former coaches or ... well, sometimes I had to fudge a bit. For example:
1) Lamar: Dale Ellis clearly didn't attend Lamar University, but his middle name is Lamar, so, there you go.
2) Murray State: Flip Murray/Murray State. Yes, I know.
3) Kentucky: Real Sonic (or Kentucky) fans will know why.
4) Lehigh: Bob Weiss has no affiliation with the school, but he did grow up in the same area.
5) LIU, BYU: Ditto #4
6) Harvard: He doesn't have an official relationship (yet), but thousands of Sonic fans wish Steve Ballmer's name would appear in a Sonic media guide in some future time.
7) Florida State: Rashard Lewis obviously never played for the Seminoles, but was heavily recruited by them.

Sadly, even my loose rules couldn't enable me to find a Sonic for UNC Asheville, New Mexico, Belmont, or Southern Miss. If any readers can provide some tips, we'll be glad to amend the bracket.
The Midwest bracket (Haywood/Meschery! Perkins/Ellis! Silas/McKey! Cage/McMillan!) has got it all over the West (Snow/Bianchi? Sundvold/Pope?).
Posted by PN at 4:40 PM 3 comments:

Today marks the 50th anniversary of, as Ed Sullivan called it, "The greatest thing that's ever happened in indoor sports."

I'd argue it's the "greatest thing" that's ever happened in any sport. Unless the NBA lowers the rims or bans teams from playing defense, Wilt's 100 is one of the few records in all of sports that is virtually untouchable.

If you haven't read it yet, I highly recommend picking up Wilt, 1962: The Night of 100 Points and the Dawn of a New Era

by Gary M. Pomerantz. It's one the best (and quickest!) basketball books I've read in quite a while, breaking down this epic feat quarter by quarter, player by player.

Now if you'll excuse me, I need to go pay respects to Wilt's other greatest performance.
Posted by Paul at 12:44 PM No comments: