There is, of course, a lot of sadness if you’re a fan of George Karl today. His team, the Denver Nuggets, were given every opportunity they could possibly hope for by their opponents, the Golden State Warriors, last night in Oakland and yet were unable to overcome a massive second-half deficit.

And with that, the Nuggets were out of the playoffs in the first round, something Karl’s teams have become all-too-familiar with in the past three decades.

In fact, Karl devotees might be surprised (not all that surprised, but surprised) to know that no man in NBA history has failed as often as George Karl in the first round of the NBA playoffs. Quickly, a list of coaches who have accumulated the most first-round losses in league history:

It is, in some ways, a list of great coaches. All of them either are now or will be at some point, Hall of Fame coaches, and I include George Karl on that list.

The smart observer will note that total 1 & Dones doesn’t take into account the overall seasons; after all, Ray Allen missed more shots in his career than Steve Scheffler, does that make Scheff a better shooter?

Here, then, is a graph of the top playoff coaches in league history, with the percentage of their playoff runs which ended in 1 & Dones: 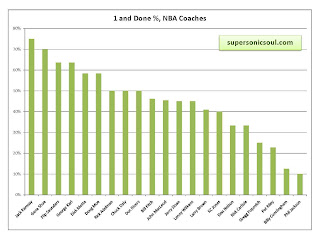 It certainly helps Karl’s cause, and the fact that were the Celtics to lose in the first round this season Doc Rivers’ career totals would almost be identical to Karl’s illustrates how tenuous an NBA coach’s playoff career results can be.

But let’s put all of that aside. I come here today not to bury Karl, but to praise him. Denver fans this morning are no doubt morose – their team has failed, once again, in the first round, marking the 8th time in 9 years they have done so under Karl. The parallels to Seattle’s experience with Karl are astounding – an exceptional regular season squad full of exciting players is booted too early for the home fans, prompting the tittering of dismissal talk throughout the region.

Certainly, there is more than just coincidence to Karl’s failures in the first round. For him to have flopped out so miserably in 11 of his past 13 playoff runs speaks to more than just idle chance, and I am sure that someone more talented than I will be able to figure out just what it is about Karl’s game-planning that leads to his repeated failures in the post-season.

But lest we forget, George Karl is a human being, and a good one at that. Not many coaches would take on the league by sporting a Seattle tie (see accompanying photo) while coaching a visiting team. Not many men in his profession have been through the physical tolls that Karl has been through in the past few years and managed to remain at or near the top of their line of work. And fewer men still have been able to reach the post-season as often as Karl has in his career.

And that, more than anything, is what people should focus on today. Yes, the Nuggets failed in the first round last night, and yes, it is easy to point fingers at George Karl this morning as the culprit. But before you do, ponder this: George Karl has reached the post-season 22 times in his career, the most of any coach in NBA history, alongside Pat Riley and Larry Brown. If the Nuggets retain Karl and reach the playoffs next year, George Karl – not Red Auerbach, not Phil Jackson, not Pat Riley, not Jerry Sloan – George Karl will have led more teams to the playoffs than any single coach in the entire history of the NBA.

There are many things to take away from last night – missed opportunities, missed calls, missed shots – but I, for one, will focus on how George Karl looked as he walked off the court. Quite a bit thinner and a little older, certainly; but not beaten.