300 Million reasons to keep the Sonics 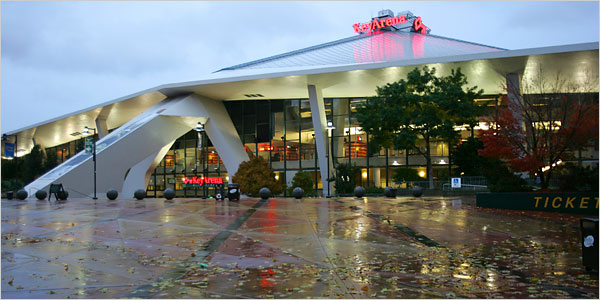 As the Sonics continue their Bataan Death March, I thought I'd try to lighten the mood by sharing a piece I performed at a Save Our Sonics fundraiser last fall (and which was brutally paraphrased in a New York Times article last year):

As you might have heard, the Sonics are going to leave town unless we give them (at least) $300 million dollars for a new stadium. Since I’m a big basketball fan, I decided to make a list of 300 millions reasons why we should keep the Sonics. So far, I’ve come up with seven:

1) A lot of people think the $300 million dollars could be spent on “More Important Things”, like housing for the homeless. Let me ask you this: how many homeless people can dunk?

2) If Sonics point guard Luke Ridnour is not allowed to express his love for Jesus Christ on the basketball court, he might have to find somewhere else to do it—like in your pants.

3) Where else am I going to be able to pay seven dollars for a pretzel? Did I mention they were magic pretzels?

4) NBA games offer a safe place for closeted homosexuals to hang out with their straight friends, while secretly lusting after the giant, scantly clad men running around on the basketball court. Or so I’m told.

6) If the Sonics leave town, the Sonics Dance Team will be forced to return to their previous occupation: Iranian Death Squad Recruiters.

7) In 1979, the Seattle Supersonics won the NBA Championship. Have you?

Feel free to add to the list in the comments. Oh, and if you get a chance, please vote for me in the Famecast comedy competition. You can vote once a day, so feel free to stuff the (virtual) ballot boxes.
Posted by Unknown at 12:14 PM

Excellent! Thanks for the laughs, Paul.

Where else but your vomit can you find something green and yellow?

For all you world war 2 buffs. It is pronounced "Ba-ta-AHN". As a Filipino (been one all my life) raised in America and a WW2 buff, I am tired of people calling it "Baton" Death March.

Supersonicsoul is 1/3 Filipino, so we appreciate the info. (and the other 2/3 apologizes for the Spanish-American War)

But how 'bout the Filipino-American war nobody Frickin' remembers.

There was a war but really, I'm over it... God bless America, legal immigrants, HBO and the colt .44!