They're All Stars to Me 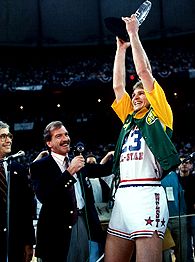 I’ve been pondering writing this for a couple of weeks now, not because it’s a gut wrenching topic or anything, but because I’m not sure whether it’s even worth discussing.

For the past little while, I’ve heard more and more about how the best way to fix the NBA All-Star Game is to switch from an East v West concept to a US v The World concept.

In principle, it’s not a bad idea, but it blows me away that I have yet to read anywhere that the NHL tried the exact same idea and abandoned it.

It blows me away that no one brings this up. Here we have an exact same scenario – a league with a mid-season all-star game no one cares about – and the same solution – using international players versus domestic players – and it failed.

Doesn’t that tell anyone anything? Am I the only one who thinks that after two or three years of seeing Steve Nash team up with Dirk Nowitzki, we’re going to be just as bored as we are now?

So, with that in mind, here is one man’s list of ways to improve this weekend.

KEEP IT LOCAL
To me, this is almost paramount. I can’t speak to the history of New Orleans basketball, so let’s make this hypothetical and say the game was being played in Seattle.

First, abandon the idea of having the coaches with the best records lead their respective conferences, and give that honor to local coaches or players. For example, at the mythical Seattle game, the East could be coached by Lenny Wilkens and the West by Paul Silas.

Second, the host team must have at least one player on the roster. This could be accomplished in one of two ways. One, the leading vote getter for the host team would make the roster regardless of if he’s a starter, or, two, have a separate vote on the team’s web site where local fans would vote for their favorite player.

Third, abandon the Rookies vs Sophomores game, which no one cares about anyway, and replace it with a legends game, with one Legends team made up of people like Dr. J, Scottie Pippen, and Karl Malone, and the one team made up of local stars, in this case people such as Gus Williams, Fred Brown, and Detlef Schrempf. Would the ratings be through the roof? Of course not, but I can’t imagine they’d be any worse than they are now for the Rookies game.

ALL STAR SATURDAY
The dunk contest and three point contest stay. The Skills Challenge goes, replaced by HORSE, and include a couple of local celebrities in the HORSE game just to give it some more fun. No, Kenny G is not a local celebrity, so shut up. Sir Mix-A-Lot is more than welcome, though.

GAME DAY
Baseball’s idea of awarding home court to the conference which wins the all-star game has merit. At the very least, it wouldn’t hurt the “competitiveness” of the all-star game, right?

In the end, the all-star game is never going to completely satisfy everyone. If you look at all four major sports, they’re all in the same bind – nobody cares about these games anymore. This is not a unique problem for the NBA, and it’s a result of years of endless hyping of every event, and one other problem – television.

You see, when we were kids, it wasn’t easy to see Dr. J on television – perhaps in the playoffs, and once or twice a year when he played the Sonics. There were no national sports channels back then, and the NBA certainly wasn’t on every night like it is now. So the All-Star game was a solitary opportunity to see all these great players we read about in the newspaper.

Now? It’s not so unique, and it’s no wonder people don’t care about the game any more.
Posted by PN at 9:08 AM

Brilliant work, Pete! Where can we nominate you for NBA Commish?

The Legends Game used to happen, but was discontinued because three or four guys blew out their knees in one game.

David Thompson was one of the injured, I remember.

It was like a video game. Ancient tendons kept exploding.

I don’t understand how so many knowledgeable people seem to think the US vs. the World would be a good All-Star format.
As Pete mentioned, it failed with the NHL, where a much greater percentage of the players are non-American.
Although the US has seen an increase in foreign players, the overwhelming majority of players are still American.
Sure, there are more than five international stars. But the 14th best foreign player (I don’t know, say, Mehmet Okur?) is nowhere near as good a player as the 14th best American player (Carlos Boozer?). A format like this would result in top-level American players (Elton Brand, Carlos Boozer, Chauncey Billups, Joe Johnson) not making the game.
Remember that only THREE internationals (Dirk, Nash, and Yao) made this year’s all-star game.
I admit that a starting five of Nash, Parker, Kirilenko, Dirk, and Yao with Gasol and Ginobili off the bench could match up with any US all-star team. But what kind of superstars do you have after that? Luol Deng? Nene? Juan Calos Navarro? Yi Jianlian? Peja?

I think US vs. World would unfairly punish the legitimately good but not Lebron-Dwyane-level American stars, while needlessly making all-stars out of role players whose only distinction is that they have a foreign passport.